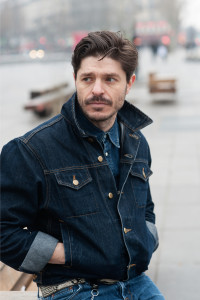 His first feature screenplay LOS ÁNGELES was a quarterfinalist at the prestigious Acadamy of Arts and Sciences Nicholl Fellowship in Screenwriting and also selected for the Berlinale Co-Production Market. Following in the footsteps of Itialian-Neorealism the film, casted entirely with non-actors speaking the Zapotec indigenous language, celebrated it’s world premier at the 64th Berlinale than won prizes at the L.A. Film Festival and the Guadalajara Film Festival. In 2014 Damian received the First Steps Award, Germany’s most coveted award for new filmmakers.

His second screenplay IN THE MIDDLE OF THE RIVER (WT), a family drama set in the rural Canyonlands of the American Southwest, was developed at the Cannes Résidence du Festival and was commissioned by ZDF / ARTE. This film is currently in post-production.

Currently he is penning his third screenplay THE LAST MAN (WT), a historical bio-pic, with the financial support of the Film- und Medienstiftung North Rhine-Westphalia.